A memorial was erected in front of the City Hall in Mayfield, Kentucky.

On the evening of December 10, a tornado dubbed the “Quad-State Tornado” ripped across four states in four hours (Arkansas, Missouri, Tennessee and Kentucky), slamming many communities in its destructive path. 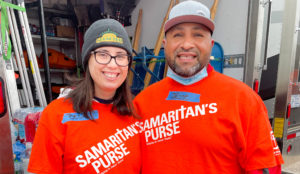 While surveys are still being conducted by the National Weather Service, many believe this “rare event” may have set the record for the longest continuous tornado in American history.

“It was an unexplainable feeling,” said Quintanilla. “Something inside of me said I needed to go.”

With planned time off already in the works, Quintanilla scrapped her plans and set off to Mayfield, Kentucky on Sunday, December 26 with her husband, Jesse Martinez.

The very next day, the pair reported for duty with the organization Samaritans Purse, which they had previously been in contact with to receive approval for volunteering.

That morning, the pair saw first-hand the destruction in the small community of Mayfield. In 36 hours on duty, they were able to assist in organizing yards and homes and removing tree limbs that may have damaged homes. But the most important job Quintanilla feels the twosome did came in the form of translation.

“There were families from Mexico and South America and we helped them communicate with the organization we were assisting,” Quintanilla said. “We helped answer their questions, translate prayers, and helped ease stress for families who feared their immigration status wouldn’t allow them to receive help.”

“All volunteers had one goal: to help rebuild. We met a couple from Florida who came to donate and pass out work gloves. Others offered free water and hot meals to everyone.” — Rebecca Quintanilla

According to the American Red Cross, hundreds of volunteers from all over the country responded in an astounding way to provide shelter, meals, comfort and support. Additionally, in Kentucky, hundreds of families are still displaced from their homes to this day and continue to be supported by numerous community organizations.

Quintanilla said the whole experience was eye-opening and showed her the strength that communities are capable of summoning, even through the worst of times. She encourages anyone who wants to help to donate to either Samaritan’s Purse or the American Red Cross.