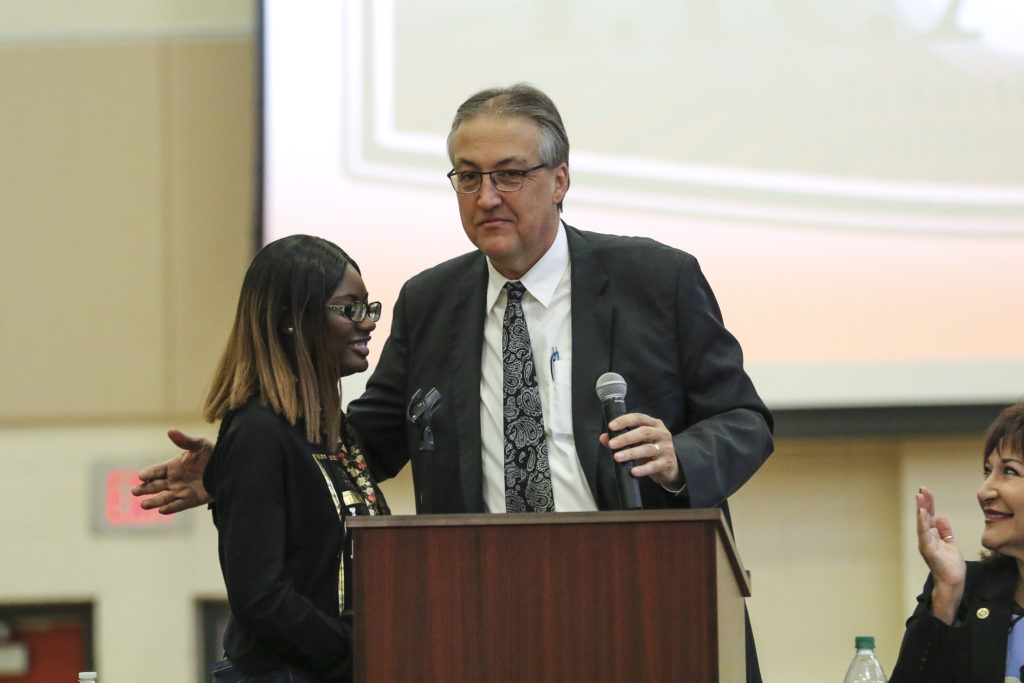 In a concerted effort to raise awareness about chronic absenteeism and the value of regular school attendance, the Truancy Reduction & Attendance Coalition of Kern (TRACK) — which is made up of partners from local school districts, law enforcement and concerned citizens — officially kicked off School Attendance Awareness Month 2018 on Sept. 7 at Freedom Middle School.

As part of the program, Bakersfield High School senior Heaven Sanders was honored with the first-ever “Daryl Thiesen Attendance Improvement Award,” which she was honored with for overcoming struggles with poor attendance. The award is named after KCSOS coordinator Daryl Thiesen, who has worked tirelessly over many years in the area of school attendance improvement and was one of the founding members of TRACK.

Across the country, nearly 8 million students miss nearly a month of school every year — absences that can correlate with poor performance at every grade level. This trend starts as early as kindergarten and continues through high school, contributing to achievement gaps and ultimately to increased dropout rates.

Problems with absenteeism start surprisingly early. National research shows that one in 10 kindergarten and first-grade students are chronically absent, meaning that they miss 10 percent of the school year, or about 18 days of instruction. That’s just 2 days per month of excused or unexcused absences. Children from low-income families are at even greater risk of missing school days.

Research shows that students who are chronically absent in kindergarten and first grade are less likely to read proficiently after third grade. Students who don’t read well by that critical juncture are more likely to struggle in school in later years. By middle school, chronic absence is the leading indicator that a student will drop out of high school.

“We know that we will never narrow the achievement gap or reduce our dropout rate until we proactively address school attendance, and that means starting early,” said Kern County Superintendent of Schools Mary C. Barlow. “All our efforts to improve curriculum and instruction won’t matter much if kids aren’t in school.”

As the new school year begins, schools, city agencies, community nonprofits, faith-based groups, businesses and others around Kern County — and the nation — are being urged to come together to deliver the message that every school day counts.